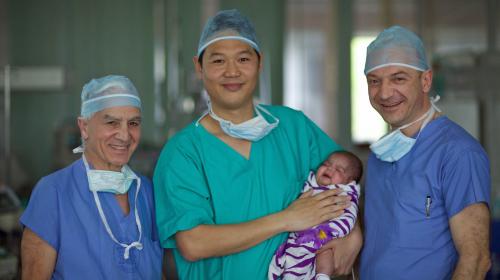 Moorfields locum consultant Mr Chien Wong joined an international team of doctors to perform the first ever surgical treatments in Armenia on infants who have retinal detachment due to retinopathy of prematurity (ROP) – a condition that affects premature babies.

Mr Wong, a locum consultant at Moorfields Eye Hospital and the Royal Free Hospital, was invited to perform the surgery and lead the surgical team in Armenia as part of an international health initiative which aims to combat childhood blindness through the prevention and treatment of ROP.

The project is funded by the Armenian EyeCare Project (AECP) and US Agency for International Development (USAID) at the Centre of Excellence for the Prevention of Childhood Blindness (CEPCB) and the operations took place in Armenia on April 28 and 29 at the CEPCB operating room at the Republican Institute of Reproductive Health, Perinatology, Obstetrics, and Gynaecology in Yerevan, Armenia.

The surgery was beamed back live to the United States to Professor Thomas Lee, director of the retina department at the Vision Centre of Children’s Hospital of Los Angeles, who used an innovative online monitoring system to observe the operations in real time and discussed the overall surgery procedure with Mr Wong and other colleagues in the theatre.

Commenting on the experience Mr Wong said: “It has been immensely humbling and exciting to work with the local doctors to perform the first paediatric surgical retina cases in the country's history. The surgeries went well and I was delighted to have been involved in establishing this type of surgery in Armenia and the surrounding region.

“The first case was a four-month old infant born 13 weeks premature, with an extremely complex ROP retinal detachment in their only eye that took over four hours, with live online input from my former mentor Thomas Lee in the USA.

“I share everyone’s hopes in the Armenian EyeCare Project, USAID and the CEPCB that this international initiative will enable doctors to undertake and continue to perform successful operations in Armenia thereby saving the sight of many children in the years to come. We are working together to ensure the local team is trained and supported to provide a long-term local sustainable service.”

The Special Trustees of Moorfields Eye Hospital funded Mr Wong’s paediatric vitreoretinal surgical training in the USA. Mr Wong added: “I would like to take this opportunity to once again thank the Special Trustees for the invaluable funding that enabled my fellowships at the two world-leading US paediatric retinal surgery centres, ultimately leading to my contribution in Armenia”.

The Armenian EyeCare Project (AECP) is a non profit organisation established in 1992, and has provided free treatment for over 1 million Armenians. The AECP in cooperation with the US Agency for International Development and the Armenian Ministry of Health launched the three-year program, “Centre of Excellence for the Prevention of Childhood Blindness,” in 2012. The vision of the program is to make specialized eye care accessible to all children in Armenia and surrounding countries and eliminate childhood blindness caused by ROP.  It is the logical continuation of the “National Screening and Treatment Program on Retinopathy of Prematurity in Armenia” that the AECP has implemented since 2010. Over 2,000 infants have been screened and 70 children have received free-of-charge laser procedures.

The Special Trustees of Moorfields Eye Hospital (charity number 228064) is a grant-giving body, which works closely with Moorfields and its research partners, principally the UCL Institute of Ophthalmology, to support their research and capital expenditure plans.

Was this information useful? Please rate the page.