1 March saw the first UKOA meeting of 2018 and despite the unseasonal snow, members braved the icy conditions and descended upon the Wesley Hotel, Euston. John Ashcroft, ‎chief executive officer, Manchester Royal Eye Hospital opened proceedings, declaring the “things we have in common are much greater than the structures that keep us apart.” In front of a growing membership, Ashcroft was keen to stress a role for everyone in the alliance, not just that for clinicians and senior management. Alliance leads Allison Beal and Melanie Hingorani then provided an update of alliance activity since December’s meeting. With an additional 24 trusts invited to join, the alliance has secured funding for 2017/18. This has helped the development of management training days for members in London and Manchester as well as a coding workshop due to take place in May. The UKOA has also continued to work with the RNIB on the patient standard and has started to develop a quality standard based on the giant cell arteritis work in Norfolk and Norwich. Project support Gill Salter then gave an overview on the development of the UKOA website, due to go live next month.

The next session saw GIRFT ophthalmology clinical leads Carrie MacEwen and Alison Davis give an update on GIRFT as well as leading a discussion on the Ophthalmology National Report. Davis felt GIRFT provided an opportunity to “shift the dial in ophthalmology “and that the UKOA’s existence is pivotal to maintaining learning and implementing change. GIRFT’s ophthalmology work stream began in 2016 and with 97 of 120 visits already completed, the national report is due for publication this summer. Matthew Cripps national director at NHS RightCare led the next session and spoke on the power of variation. He brought attendees on a journey from 2009 when the First Atlas of Variation was published to the evolution of RightCare’s work today and its impact on programmes of care. Cripps finished with an inspiring presentation of ‘What can the ancient Greeks and the Medieval English teach NHS improvement?’, where he teased out the six steps of optimal improvement processing. 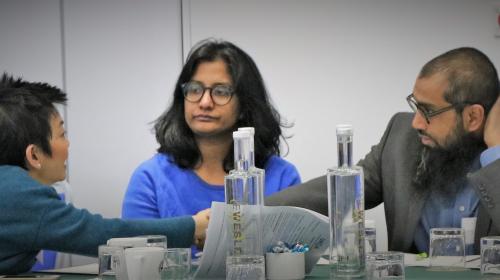 Procurement was once again a hot topic and this provided the opportunity for some roundtable discussion and group activity. Melanie Hingorani and Kath Ibbotson gave an initial update on the procurement work stream including cleaning up inaccurate national data and creating consistent supplier codes. Following this, delegates worked in groups to sniff out duplication in the contents of theatre packs. The final session of the day focused on patient standards and featured Sarah Thomas, lead pharmacist for satellite services and contracts, Moorfields Eye Hospital, presenting on the innovative #KnowYourDrops campaign. The campaign addressed issues of poor treatment compliance for eye drop patients and successful improved outcome and quality of life for patients.

The alliance meets quarterly and the next meeting is scheduled for 13 June 2018. For more information, email uk.oa@nhs.net.