Our eyes might be small, but they provide us with what many people consider to be the most important of our senses – vision.

Vision occurs when light enters the eye through the pupil. With help from other important structures in the eye, like the iris and cornea, the appropriate amount of light is directed towards the lens.

Just like a lens in a camera sends a message to produce a film, the lens in the eye 'refracts' (bends) incoming light onto the retina. The retina is made up by millions of specialised cells known as rods and cones, which work together to transform the image into electrical energy, which is sent to the optic disk on the retina and transferred via electrical impulses along the optic nerve to be processed by the brain. 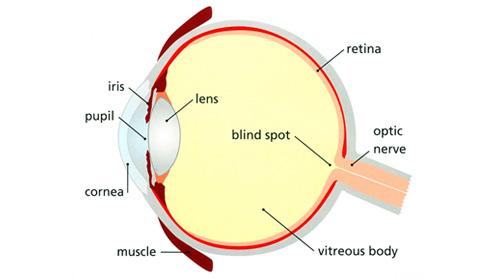 What makes up an eye